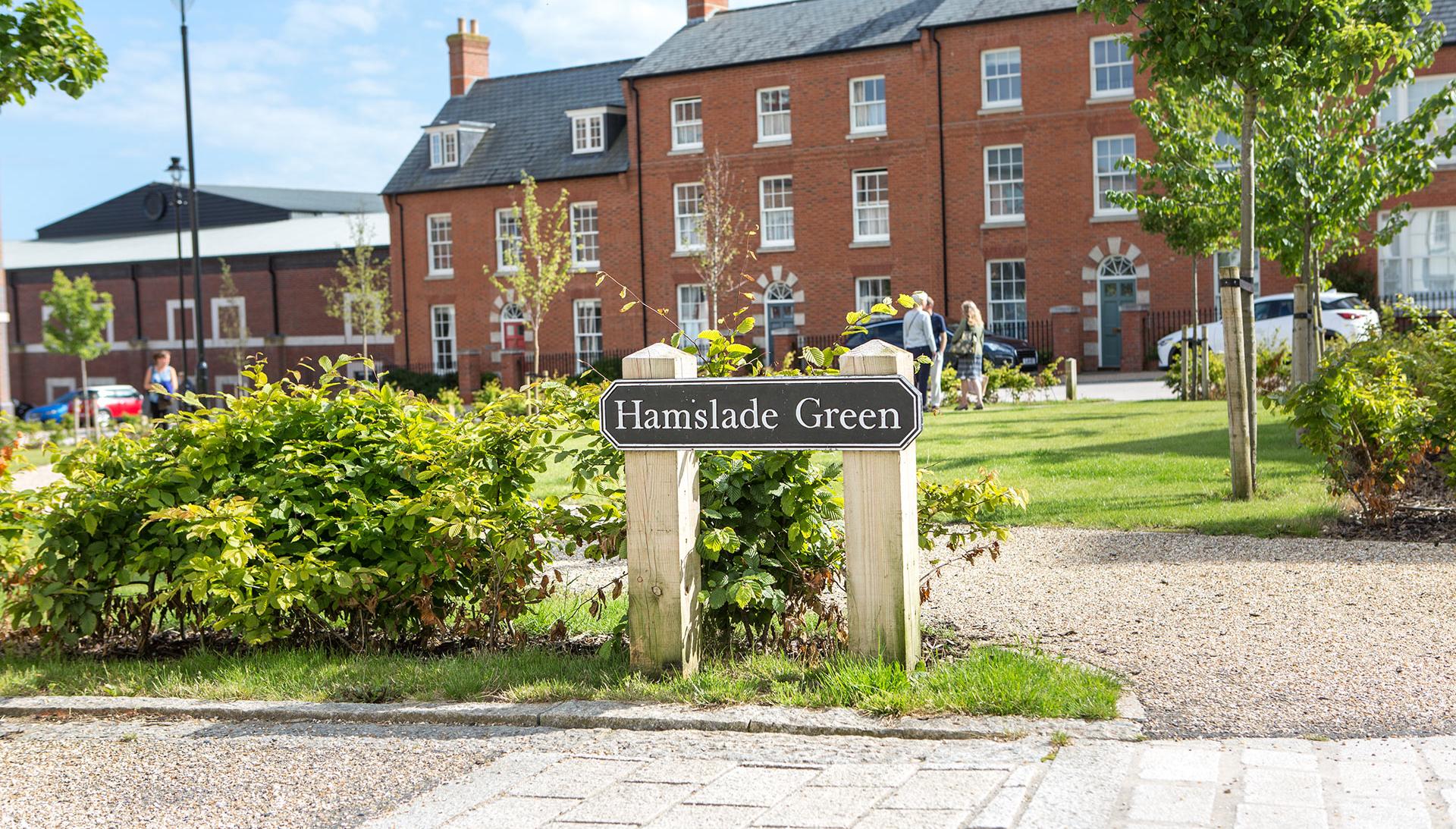 At the start of the Poundbury development during initial planning themes were drawn up for each phase. The names of Phase 1 carry a literary link. Middlemarsh and Evershot were villages that Thomas Hardy, the Dorset author, used as an inspiration for the country of The Woodlanders.  That work introduces the village of Little Hintock.

Crossing Middle Farm Way (named after the original farm just south of that road) you move into Phase 2 and an area where the names originate from the Duchy of Cornwall’s rural estate. Pendruffle, Tinten and Wadebridge are all long established tenanted farms.

Moving north of the Bridport Road – this route has existed for centuries prior to Poundbury being built – more Estate names; Stowey, Tyberton, Whitecross and Kingsthorn.

The racehorses of Her Majesty Queen Elizabeth the Queen Mother

Moving north again to the Queen Mother Square area you come across a few names that aficionados of National Hunt racing will recognise as the names of horses owned by Her Majesty Queen Elizabeth the Queen Mother. These include Royal Pavilion, Kings Point, Inch Arran, Newborough and Arch Point.

In Queen Mother Square, there are two buildings that are not named after racehorses. Strathmore House and Bowes Lyon Court are both named after the Queen Mother’s grandfather – Claude Bowes-Lyon, who was the 14th Earl of Strathmore. The Duchess of Cornwall Inn was named in honour of Her Royal Highness.

Moving North East into Phase 3, one comes across names commemorating some of the engagements in which the Dorset Regiment saw action in the nineteenth century.

Peninsula Way, the war with Napoleon and the engagements in Portugal and Spain, where the Regiment marched thousands of miles with Wellington. (1811-16). Peninsula Way follows the top of the escarpment above the Yeovil Road (A37) and deliniates the north-western extremity of Poundbury.

Vickery Way refers to Private Samual Vickery, one of the first individuals to be awarded a Victoria Cross – for action on the North West Frontier in the Tirah Campaign. (1897) The Tirah region is on the Afganistan/Pakistan border.

Shaiba Place remembers the 2nd Dorset actions on the Tigris against the Turkish army during the war in Mesopotamia (1916). In the following actions the Regiment suffered very heavy losses, fewer than 30% returning home.

Sarah Sands was a merchant vessel loaded with ammunition which caught fire, heroically extinguished by members of the Dorset Regiment. A battle honour of that name was then awarded to the Regiment.

Continuing north-eastward, the area has names with royal association, such as Dukes Parade and Crown Gate. But there is a link also with the ancient field systems of the Manor of Fordington with Shuffling Furlong, Binden Abbey, Gallows Down Lane and Hamslade Furlong.

Victor Jackson was the first Poundbury Estate Manager for the Duchy of Cornwall who died in 1996.