Residents of Poundbury are being asked by the Duchy of Cornwall to take part in an annual survey of nesting birds.

The Big Duchy Bird Box Survey asks residents to monitor and record sightings of different species of birds that are using bird boxes built into homes and buildings across different Duchy of Cornwall developments.

This is the second year that the survey has taken place and will include Poundbury and developements in Cornwall (Nansledan, Tregunnel Hill and Trevethow Riel) and Oxfordshire (Bletchingdon). In recent years the Duchy has worked closely with the RSPB to install more than 500 permanent bird boxes in new homes and buildings on its developments as part of its commitment to enhance biodiversity.

Four sites in Dorset and Cornwall have taken part in the survey before. Further Duchy-owned sites in Cornwall, Devon, Dorset, Somerset and Kent will be added in due course.

The nest boxes are built into the walls of buildings and are entirely self-contained. They are mainly aimed at supporting swifts, which are an endangered species, but can also appeal to house martins, house sparrows, blue tits, great tits and starlings.

Dr Thaís Martins, an expert in zoology and avian biology, is supporting the Duchy to monitor the use of the bird boxes.

She said: “Last year’s survey was a great start and we even had some residents organising evening bird watches. This year we are really keen for more people to take part so we can continue to gather important information.

“With more people staying at home and self-isolating or exercising in their local neighbourhoods, it is an ideal opportunity to notice even more nature on the doorstep.”

Endangered swifts, whose numbers have fallen in recent years, start breeding at the end of April, with chicks hatching from mid-June and raising chicks until August. One of the main reasons for their decline is the refurbishment and demolition of older homes and buildings, leaving them with no nooks and crannies to nest in.

Although swifts have been a focus of the bird box initiative, the first species to occupy the boxes are usually house sparrows and starlings, two species that are also in decline.

Dr Martins added: “Swifts have been spotted by residents and we hope that we could soon be recording information about the first breeding swifts using these bird boxes.”

Results from last year’s survey found that a number of species were spotted using the boxes, with house sparrows the most abundant with 26 confirmed nests. House martins also took up residence with 11 confirmed nests.

The total number of boxes showing signs of occupation was 88 out of around 360 surveyed. In some cases birds had even moved into the boxes while buildings were still under construction.

So far this year, a preliminary survey of Nansledan and Tregunnel Hill in Newquay indicates that 147 nest boxes out of 323 surveyed are already showing signs of occupation, which is a 20% increase since last year.

Stephen Fitt of RSPB South West, who has worked closely with the Duchy of Cornwall on the nest box initiative, said: “The longer the boxes are in situ the more likely they are to be used, it’s interesting to see house martins using the swift boxes as they usually build their own nest cups under the eaves. We’re keeping our fingers crossed for some nesting swifts this year.”

It is hoped over the next 30 years, between 5,000 and 8,000 bird boxes will be installed in the Duchy’s existing and planned developments in the UK.

The residents’ data will be used to inform new developments on which type of box provides better accommodation for birds, as well as which location and aspect is more suitable for the different species. 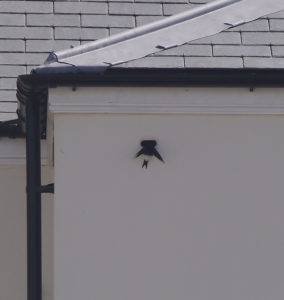 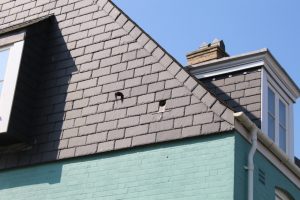