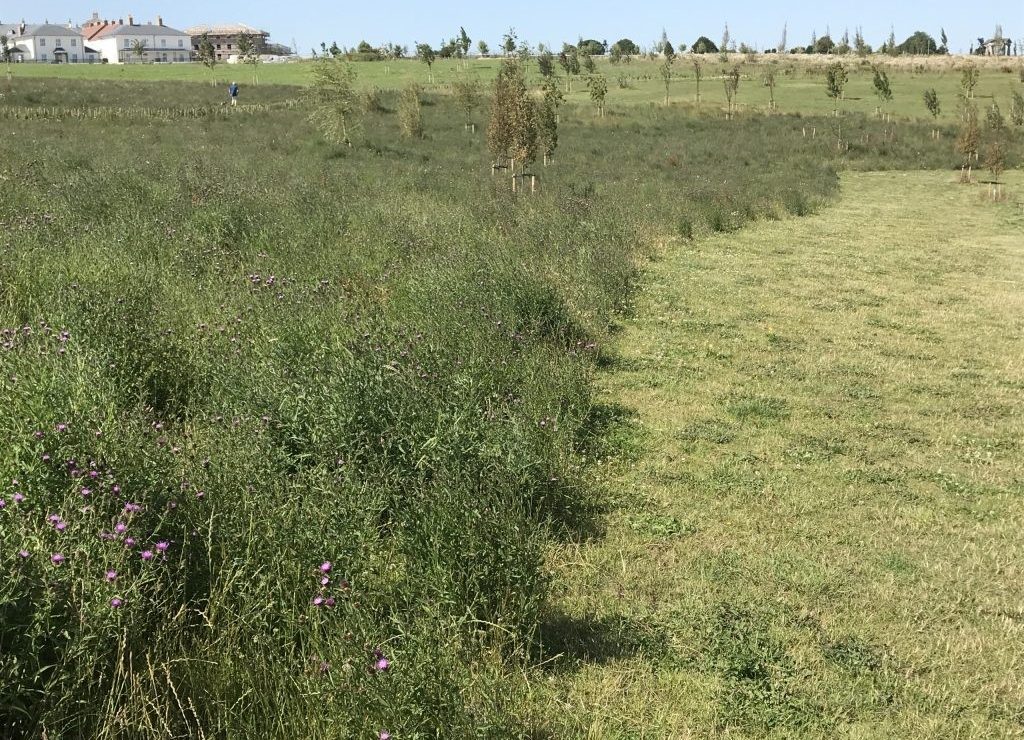 With far less need to grow hay to feed horses and with silage replacing hay as the predominant cattle and sheep winter fodder, wildflower meadow areas dramatically declined in the last fifty years.  Such meadows can however make superb habitats for urban parks and open spaces, bringing wildlife closer to people’s everyday lives.

As many residents will know, the Great Field was previously arable fields, on clay and chalk ground. As the development has progressed, alongside the more formal areas with playing fields, informal parts of the Great Field have been sown to wildflower meadow mixes.

One area which is developing well was sown around five years ago. Now it is a sea of Common Knapweed, with plentiful Lady’s and Hedge Bedstraw, Quaking grass, Bird’s-foot trefoil and other meadow wildflowers. This area is managed by mowing (and removing the arisings) in August. Because of the nature of the Great Field, it is not possible to graze the meadow as would be done if it were on a farm. Instead, it will be mown again around the end of March, to remove the winter growth. This mimics the action of animals grazing on a meadow over the winter.

A second area of wildflower meadow was created around three years ago, using a different seed mix. This meadow is a bit coarser with more ox-eye daisy. This will be mown in a few weeks and again, the arisings will be removed. On-going management will enable this to develop into another very attractive wildflower meadow.

Over the last year, the Duchy of Cornwall has worked closely with our specialist advisors People Need Nature and local wildflower seed supplier Heritage Seeds, to establish a further meadow. Extremely wet conditions followed by an exceptionally dry Spring, led to a slow start, but it will be flourishing in the next year or two. The wildflower seed was collected from existing meadows in Purbeck, supporting local populations of native wildflowers.

This area will be allowed to grow up to meadow height, then cut in July to a height where it becomes a usable area of greenspace for the local community, especially over summer school holidays – an amenity meadow. Including low-growing species such as Red Clover and Bird’s-foot trefoil into such a mix, means the meadow can continue to flower after cutting, providing nectar and pollen for insects.